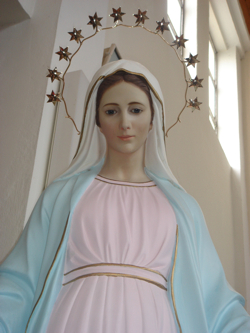 Statue of The Virgin Mary, Queen of Peace, in the Church of Tihaljina near Medjugorje.

Daria Klanac : On several occasions when all of the children were not present at the apparitions, the Virgin asked: “Where is that other boy?” – “Where are the other four?” Those questions come as a surprise, since it is thought that the Virgin knows all.

Arnaud Dumouch : In Fatima, Mary did the same in one of her apparitions. Lucia was late because she was detained. The response is clear: when Heaven descends to Earth, it adjusts its language to that of human beings. Thus, Mary raises questions to the children the answers of which she already knows. To some extent, the same disparagement is offered by those who criticize the justification of prayer: “Why seek something from God through prayer when Heaven knows all?” Why?—because Heaven gladly grants that which we seek and thereby teaches us to be grateful for its gifts.

D. Klanac : The Virgin acted as a Mother towards the visionaries in Medjugorje. “Dear children—my dear children.” There are those who see this as being “childish” on the part of the Virgin—in fact, almost unworthy of the Virgin to lower herself to the level of the children.

A. Dumouch : All of this is an invalid argument. In fact, it is almost a scary argument by what it reveals about the souls of those who employ it. They seem to forget the words of the Gospel (Mt 11:25): “At that time Jesus spoke and said: “I praise you Father, Lord of Heaven and Earth, that thou didst hide these things from the wise and prudent, and didst reveal them to the little ones.” Yes, Father, for such was thy good pleasure.” One must keep in mind that Mary’s queenly dignity scandalized Lucifer simply because she was so humble. “God cannot grant authority over the Universe to so intellectually small a being,” said Lucifer.

In this case, one should, then, also find fault with Saint John for such unseemliness (1 John 2:1): “My little ones, I write to you urging you not to sin. However, if you should commit a sin, we have an advocate with the Father: Jesus Christ, the Just One.”

D. Klanac : Still others are surprised with the sentence with which the Virgin concludes each of her messages: “Thank you for having responded to my call.”

A. Dumouch : The sentence means that faith in God (and of those who are united with Him in Love, namely, his saints), is a call, an invitation that God supports through His mercy and to which man is free to respond.

Hence, God, in His mercy, sustains persons; however, He allows them freedom to respond. Saint Thomas calls this response of Love “a merit” in the sense that God and Heaven recognize true merit in those who, led by mercy, answer in a positive manner.

A. Dumouch : We envision her as being the great Queen of Heaven, the one who commands the angels. We anticipate that we will meet the Empress. Truly, she is humble, simple, and even, childlike. She has a clear understanding and view of those who suffered and loved much. When one sees her for the first time, one remains dumbstruck by the fact that one does not detect anything out of the ordinary. In the meantime, she is present within us more than we ourselves are. We also see that she is dead inside because of her great internal loneliness because of the absence of Jesus after his Ascension as compared to His silence in the Eucharist. This is so striking that those who suffered greatly sense that she understands them. Seeing her, we often react in the same manner as the Superior of Saint Bernadette when she saw her for the first time: “So, is this little Bernadette?”

Then, all at once, a great and powerful sense of shock engulfs you: “If God chose her and placed His full confidence in her such that she manages the distribution of mercy to mankind, then, how far removed am I from God?” You begin to blush since your reaction is so like that of Lucifer when he revolted against Almighty God’s great intent that lifts the humble.

D. Klanac : With Mary as my example, Mister Dumouch, I thank you for these conversations.