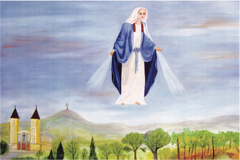 Painting achieved in 1974 by the
self-taught artist Vlado Falak.

Daria Klanac : An image of the Virgin shown to be hovering above the Valley of Medjugorje—as though Mary wishes to protect it with her mantle—was hung at the back of the church, at the partition-wall of the choir prior to the apparitions themselves. It was painted in 1974, by a local artist, Vlado Falak, when the visionaries were between the ages of three and ten years of age. At that time, they did not all attend the same church. In what manner could that image affect the intellect of only those six children and produce an imaginary vision,[48] as some seem to suggest?

Arnaud Dumouch : That simply is not possible. I think that such a supposition as represented by those who question Medjugorje can mean only one thing: the fact that they spoke such a thing indicates that they believe the children to be sincere. However, to think that such an image can be the cause of the manifestation, a type of sub-conscious effect—after and elapse of some twenty-eight years—on the part of persons who have since matured, become fully self-aware, married, grounded in their lives, is simply untenable as a supposition: if that were the case, those individuals would have to behave in a hallucinatory manner.

D. Klanac : Still, for others, that same image represents a sign that serves as portent of the apparitions to come.

A. Dumouch : Yes, indeed. Those who believe in the apparitions truly can see in that image an unusual similarity that is filled with meaning, namely, a sign inspired by Heaven. Naturally, it does not serve as any sort of proof. The history of the Church is replete with such unusual prefatory signs that sometimes extend over several centuries. As an example: a place of Marian pilgrimage in the past, long since forgotten, sometimes serves as a renewed site of contemporary apparition.

48. A photographic memory or even an absolute memory is the ability to remember a great number of images and sounds in their most minute details. [↩]