A Brief Overview of the Apparitions As They Occurred in 1981

A Brief Overview of the Apparitions
As They Occurred in 1981

Medjugorje is not a village in the true sense of the word; rather, it is a parish of two thousand six-hundred souls. The parish assumes its name from the largest of five villages, namely, Medjugorje; however, the parish is comprised of the villages of Medjugorje, Bijakovići, Vionica, Miletina, and Šurmanci. In the center of its fields, the parish church of Saint James, the patron saint of travelers, is set down framed by its two white belfries as though a dove, and is nestled in between the mountains and hills that surround it.

Medjugorje is in Herzegovina, to the south of the Republic of Bosnia and Hercegovina now independent nations. Viniculture, tobacco, fruits and vegetables are cultivated in Hercegovina, but not in sufficient measure so as to support its many fold families; hence, many of its men set off throughout Western Europe since availability of work was more favorable.

Herzegovina is primarily settled by Croatians who were Christianized in the VII century. During the time of Turkish occupation, (1474-1878), the Franciscans remained close to the people and thus preserved the faith. The fruits of that closeness are still evident today: twenty priests, and as many nuns come from this small parish.

In 1981, the pastor of the parish was Fra Jozo Zovko, and his assistant was Fra Zrinko Čuvalo. The majoity of the parishoners are practicing Catholics. Meanwhile the communist menace does not look kindly on practice of one’s faith, but did not divert the people from going to Church. Their faith was strengthened through the trials and persecutions they endured through the last decades, as well as by frequently less than kind history.

The pastor was well-known throughout the land even prior to the apparitions: his catechism students won the Catechetical Olympiad and were rewarded with a trip to Rome where they were scheduled to meet with Pope Paul VI.

Fra Jozo is on the road often as a preacher and conductor of spiritual renewals. On the occasion of one such mission when he was absent from the parish, the Gospa appeared to six children from the village of Bijakovići. The event will become the cause of extraordinarz movements at the end of the Twentieth Century.

Alone, in the absence of Fra Jozo, Fra Zrinko Čuvalo becomes impatient. Nervous by nature, as well as stern, but sincere, he barely was able to control the situation. He climbs the mountain along with the children, and bombards them with questions. The questioning begins, and the terrain is prepared for the pastor.

Upon his return from his journey, the third day of the apparitions, the village of Bijakovići, where the visionaries live, and the hill beyond, the pastor discovers it to be overflowing with a multitude of people. Immediately, he finds himself confronted by six children between the ages of ten and sixteen who claim to have seen the Gospa. He invites the children, who he otherwise did not particularly notice either as church-goers or at catechism, and persistently questions them. The conversations are recorded. Thanks to that fact, the beginnings of that extraordinary narration are known to us today.

The first day of the apparitions, the 24th of June, 1981, was the feast of Saint John the Baptist. Summer vacation from school began, and Podbrdo, a hamlet of Bijakovići, rich with young people who once again found themselves gathered together, inasmuch as they attend schools in various locations. 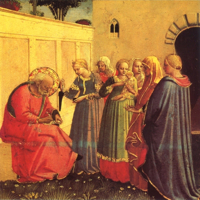 Zechariah writing:
"His name is John".

Mirjana Dragičević and Ivanka Ivanković agreed to meet that afternoon at the foot of Crnica hill, a place removed from the hamlet. Another girl was to meet them, namely, Vicka Ivanković. Not far from there, Milka Pavlović came to gather her sheep. Two young men passed by, Ivan Ivanković and Ivan Dragićević. The six of them that gatherd together at that site between five and six in the evening, on the 24th of June, 1981, claim to have seen the Gospa.

The next day, the 25th of June, 1981, when they returned to the same site, there will once again be six of them, however, this time, in place of Ivan Ivanković and Milka Pavlović, Jakov Čolo and Marija Pavlović, the sister of Milka, were present. That group of six visionaries will remain the same even today.